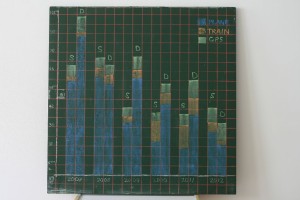 In making the graph above, showing all our journeys for the years 2007 – 2012 (D is Dan, S is Soph, numbers on the ‘y’ axis are thousands of km), I used a custom-written piece of python software which detects ‘gaps’ in our data and if they are above a certain threshold of km apart, logs them.

All well and good, I thought, until I talked to Soph who has done quite a lot of commuting in Berlin since 2012 as a result of her teaching job at the HZT in Wedding. She was interested in these ‘missing’ journeys and so I set about wondering whether I would abolish the threshold altogether and join every gap up. I was nervous about this and so I wanted to somehow ‘see’ it to check it which gave me the idea to generate lines held in a custom table in our spatialite database which would join everything up. I could then do the analysis from there. 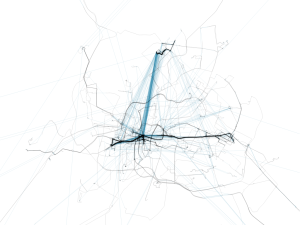 2012 Soph Berlin With Missing Journeys in Blue plan b

I found this so seductive, I wanted to share it. I’ve yet to analyse the data to find out whether results such as the amount of missing kilometres makes sense (although I’m not sure what I’d test this against) but I find it an interesting exercise already.

This entry was posted in Code, GPS, Python, Software, Walking and tagged QGIS, Quantified Self, Spatialite. Bookmark the permalink.