Walk with Martin in Albrechtshof 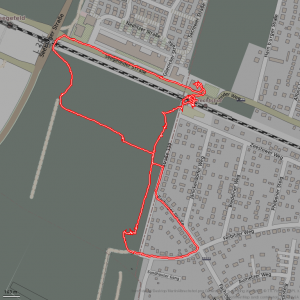 Skirting the outskirts, where Berlin ends

A shorter walk than last time but still very enjoyable – a hot, sunny day, the meadow where Berlin ends was glorious in the summer, the last time I was here I was with Steven Hodge in the winter. Lots of interesting plant and insect life.

We tried dowsing but suspected that the site is actually a large buried reservoir – hence the rods going crazy for me and not doing much for Martin (probably). Thinking about Tiergarten next – interesting to dowse here perhaps, on the trail of Benjamin or indeed during Martin’s walk next weekend on the trail of the Thomas Pynchon character.

Here’s an edit of a recording I did in the field, bracketed by two aeroplanes flying over. Why is it that the interesting, marginal places seem to be under flight paths?
Only available at the moment as a download – does anyone know a decent sound hosting site where I can embed a link and stream from? [UPDATE 2012 – I now use SoundCloud for this sort of thing – find us here]

[UPDATE 8 JULY] – Martin reports that on 1980s maps, the whole area looks like a swamp which would make sense of all the dowsing positives and the reservoir hints. The graphs on his blog show a large peak running due North-South roughly through the boundary where the wall ran. This is exactly what I wanted to see, some sort of threshold on territory that no longer bears many signs of the brutal and impenetrable border it once was but somehow still resonates.