I continued with the webcam documentary of our days, this time remembering to take out a fully charged eeepc.

First off was a trip to Christchurch Mansion in Ipswich which is reputedly haunted. You can see the herringbone pattern parquet and black and white check flooring in the film. We had a fine time speculating about priest holes and hidden passages with Graham Harwood‘s son. Graham and I talked about how the house must have represented such a drain and oppression on the community around it and how glossed over this aspect of these grand places always is, like the monasteries I visited with Dad in May. The best thing in the house for me was a set of improving Elizabethan panels which depicted a John Donne poem with some fascinating hermetic and magickal symbology. The purpose of haunting the haunted places of Ipswich was to gather (preferably organic) material for the Kirlian Photography Workshop at CSV in the afternoon.

After stopping outside on the grass for a while we walked into Ipswich and had a pub lunch (00:00:16 in the film) before going to CSV to catch up on emails (00:00:28) and set up the Kirlian Photography Workshop, led by Jonnie and Kati as Martin had to be in London that afternoon. 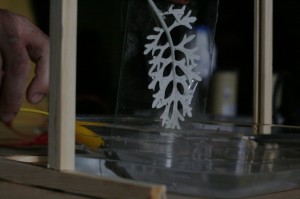 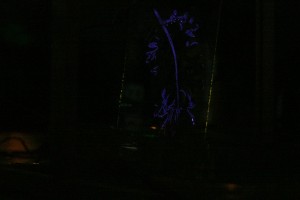 Kirlian Photograph of Leaf above

Jonnie drove us all back to Henley afterwards and Martin supervised a delicious curry (00:01:05 onwards).