At Last – Long Meg and Her Daughters

My first stone circle of the trip – hooray – and the family came too (and my Mum). I think it is a good one, not being an expert, but Burl says that Long Meg is the sixth largest stone circle of them all (other sources say that it is the third largest in England) and as you can see on Google Earth, there’s a road running through it. 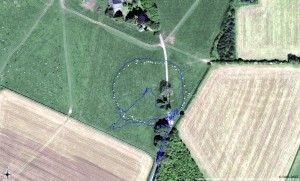 Perhaps because of this, we were not the first, to paraphrase von DÃ¤niken, in fact there were quite a few goretexted nerdy families, usually headed by an enthusiastic parent (no, not necessarily a Dad) passing through while we were there. Like art galleries, I am quite surprised at how quickly most people, even the nerdy-looking ones, ‘do’ things like this. 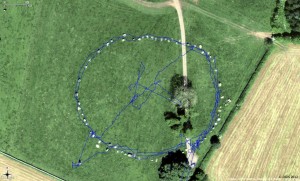 Because we had several things on the agenda, our time with the stones was longer. We took photos, observed the previous offerings… 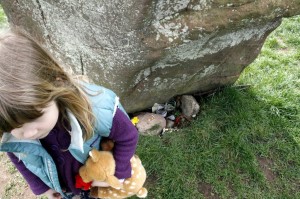 …recorded sound (bit windy) and dowsed with the divining rods. 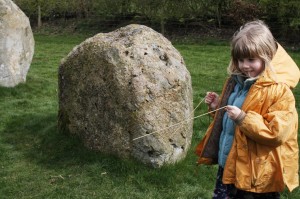 I think I said this in Suffolk, but what I like about divining is that you just do it without much ado and everyone seems to be able to get some sort of result. They also seem to match up i.e. people find that the rods cross at the same point (this is what I want to further test with the digital dowsing rods). Kids like it too, if you can get them interested. 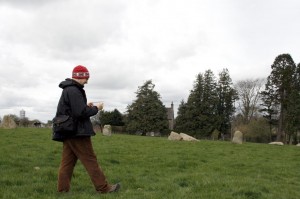 I mostly tried crossing the threshold of the circle which always seemed to produce a crossing (with Soph and Ruby too). When I tried to walk round the circumference between stones, the rods stayed crossed. It seemed to me that I was able to find a centre point, at which there seemed to be a sort of hump in the grass. This was lining up with the axis made by Long Meg herself, standing as she does outside the circle and the East/West axis which is accentuated by prominent stones. Burl mentions that there was charcoal and bones found at the centre. 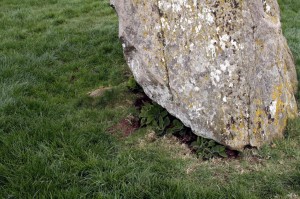 One detail I noticed was that the stones were undermined by rabbits who seemed to like making their burrow entrances under the stones, introducing little crops of plants feeding I thought on the nitrogen-rich soil their droppings were leaving.
After this jaunt, we made a stop, as most seemed to do, at a great flour mill/art gallery/tea shop, The Watermill at Little Salkeld. One of the best Earl Grey teas I’ve had in ages. 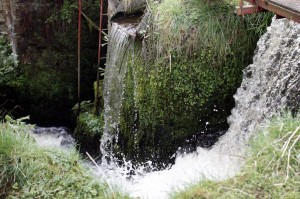 2 Responses to At Last – Long Meg and Her Daughters