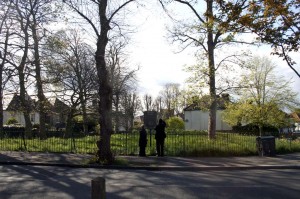 A hidden relic of the Bronze Age in a suburban street. While I was staying with my Mum in the house I grew up in in South East London (I once made a project about this house as it has been occupied by my family since it was built in 1936), my Dad came over and we decided to have a little excursion.

My Dad had mentioned a tumulus he visited as a child walking his friends dog on the other side of Shooter’s Hill and he directed us there. Sure enough, as we drove down Shrewsbury Lane, a street very typical of the suburbs around where I grew up, there was an empty plot with no houses on, a fenced low mound with the sign below.

It was an amazing and surreal find, in the middle of suburbia. The man opposite was clearing his garden and there was an old oak tree between the low front garden wall and the street. All very normal, apart from this remnant from 3-4 thousand years ago, before Sunday afternoons were invented. 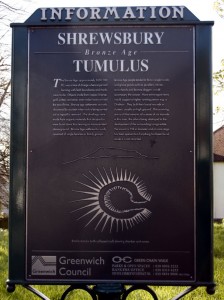