After meeting up with Peter at Martin’s micro_blackdeath ATmega noise workshop at NK on Saturday, we were able to talk a bit more about what I’m calling the Jacquard Loom GPS visualisation of the activity in our database.

The python script wot I wrote a while ago visualises a 24-hour period as a line of text, the column width of which you can determine. If there is a GPS recording in the period in question, an asterisk is inserted, otherwise a space is shown. This gives a visual impression of how much (or how little) data we actually record each day.

The earlier post shows the output of this script as a printout from a dot matrix printer but I was talking to Peter about a processing application that reads the script output of asterisks and spaces and visualises this as simple black boxes and gaps. Even though he has plenty to do to finish his MA, he whipped up a quick script that produced the image above.

The picture above shows 1 month (January 2011 – there are 31 lines), the black is where there is GPS data, the white where there is none. The blank space in the left of the image is the time from midnight, so basically no GPS because we’re asleep or at least at home. Because there are 48 blocks, each block represents 30 mins. Compare the image above from Winter to this one below from Summer where you can clearly see the effects of the warmer weather and how it effects our GPS data. 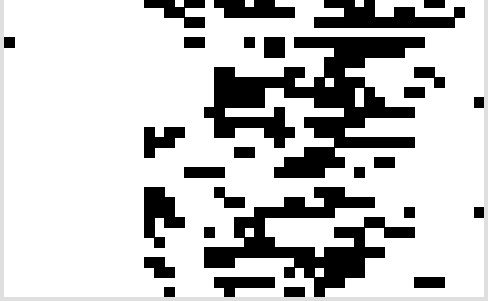