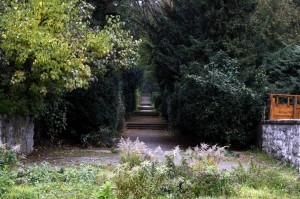 I arranged to meet Martin at Attilastrasse and was half an hour late, much to my shame. The strange park that the TP is in is called MarienhÃ¶he. Martin puts it well. “I can remember previously dreaming of several features of this unusual place and of its act of description here; the terracing, as if in a hall but obviously an exterior location. …” 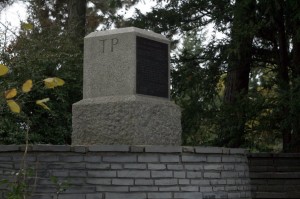 Reading about MarienhÃ¶he on de.wikipedia.org, it seems it was the site of a sand and gravel quarry, then a rubbish dump which was augmented with rubble from the Second World War and then grassed over and made into a park with a toboggan run and open air theatre. 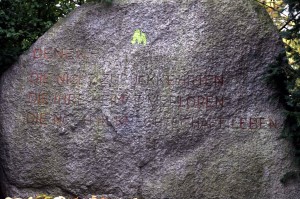 One of the curious things about this disorientating park was that the Triangulation Point itself was tucked to the side of a large circular clearing made with stone on the summit of the park, under a tree. The focus of the circular clearing was this large stone above with the curious inscription, which, unlike the TP point itself, lacked any further information or interpretation. The wikipedia article doesn’t mention it. It is as if it is not something anyone is proud of.

In any case, although Martin was successful with his high and low frequency and entropy logging, I made a big mistake by not realising that it wasn’t enough to have the Garmin Forerunner on, I had to press ‘Start’. I had planned to make some nice heart rate/elevation maps like here. I did get my usual GPS data, however but I was very disappointed. 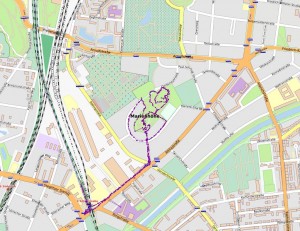