It’s been around enough in my mind (actually since the Suffolk Psychogeophysics Summit [SPS]) to finally talk about it here. A mash-up of the esoteric and the technological – my nascent Digital Dowsing project.

My dowsing weapons of choice are two pieces of brass rod, bent at right-angles, held loosely in the hands. With me, they cross each other when I’m over something. I’m not so concerned with what it is that triggers them and I’m not so interested in the esoteric theories of how they work but it does seem to me that they are indicators of some subconscious impulse that most people have to fine-grained location. I also have experienced casual evidence of ‘agreement’ between people. This happened at the SPS when Ryan took them and seemed to find similar ‘findings’ as me. This happened again during Martin’s workshop in Tiergarten where an adult and his 6-year-old daughter had a go with the rods and seemed to find places that agreed with my findings.

What I want to do is build a(n Arduino?) datalogger that, in conjunction with an accurate, industry standard GPS (more of this in a future post), would log the movement of the rods and geolocate them on a map, enabling the results to be compared either between users or allow one user to build up a dowsing landscape over a certain area.

Perhaps unsurprisingly, I am not the first. Don’t put ‘Digital Dowsing’ into Google, that way lies madness. Here are some projects I found interesting

My DD0.1 is to use the brass rods and try to digitise their movement with rotary encoder found in an old mouse. This seems better to me than the potentiometer method of rotary encoding which would put too much stiffness in the swing of the rods.

In my initial searches for hacking the mouse itself, I came across this excellent site as well as a page on the Arduino Playground site itself about interfacing a PS/2 mouse with an arduino.

Here’s a nicely annotated photo mostly for my own reference and hopefully anyone else out there who might need it: 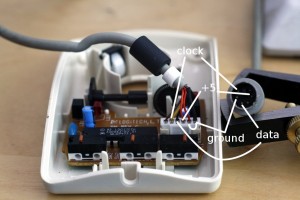 What the wires are on a Logitech Trackball PS/2 Mouse