As promised, here’s an update about making our old pen plotter sustainable in terms of pen supplies by using archival ink provided by the Lamy M22 refill: 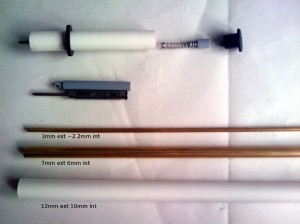 At the top of the image you can see prototype I, which sometimes works. The problem is the washer I’m using to emulate the flange on the pen (see the earlier post). I have tried this in a couple of positions on the barrel but it still seems to mess up when the holding mechanism comes to pick up the pen from the carousel and when it tries to put it back. Bad.

I was quite proud, however of what I achieved – the refill is spring-loaded into a couple of brass rods (annotated with internal and external measurements in the picture) which have been cut so that the smaller guides the nib-end of the refill and the larger guides the barrel. I found the brass rod in Conrads here in Berlin. The white pvc rod came from Bauhaus, the DIY shop, not the Weimar Republik school. The spring itself is from a normal biro and I cut the helpful adapter you get with the small M22 refills to a good length to fit into my pen barrel. I used masking tape to wrap round the brass rod to the right diameter to fit snugly inside the white tube and secured it in place with epoxy.

Like I said, the pen holder itself works well, it’s just the washer that is causing problems. Firstly it is slightly too big in its internal measurement to fit snugly on the barrel of the white tube and secondly, because it is rubber (I think it’s an old tap washer) it isn’t exactly flat. It seems that this flange of the pen is the bit that needs to be accurate. Even though the white tube is 0.5mm wider than the pen, this doesn’t seem to cause problems but the flange position and dimension has less tolerance.

I am now considering a new tack: making a (silicone? polyurethane?) mould of the existing pens and casting (polyurethane? polyester?) the brass rods into these. I might also try drilling the gubbins out of an existing pen and housing my brass rods in this. Or knocking it out with the larger brass rod *update* this works!