Oh you lucky people of Kortrijk, to have had such a fantastic festival of experimental music, sound and installation as the Happy New Ears festival for many years and now for the creator of that festival to be running the Kortrijk edition of the Festival of Flanders. You have one of the only contexts to experience the sort of work that the Happy New Festival shows in this part of Europe, let alone Belgium. 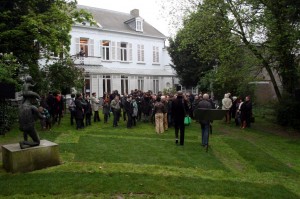 Listening to Chris Watson's After the Flood

I’ve been lucky enough to know Joost Fonteyne, said creator of Happy New Ears and now Festival of Flanders for over a decade. Sophia introduced me and Mole Wetherell to him last millennium when we were all in Reckless Sleepers and Joost programmed us at his theatre, the Limelight. It was also Joost who initially commissioned ‘Into the Light of the Night‘ on the strength of experiencing ‘Peninsula Voices’.

It appeals to my perverse nature to take pictures at a sound event, so I collected some impressions of the guided tour which took place in very persistent, Flemish rain. This was a great pity, not just because we got very wet (the tour was over an hour long with 11 stations) but because the sound of the rain, being like white noise and saturating all frequencies, made some of the subtler pieces hard to hear.

I was there with the wonderful sound artist Els Viaene, who collaborated with us on ‘Into the Light…’ and bumped into the equally superb Duncan Speakman. We were especially looking forward to a concert given by Chris Watson, the BBC wildlife sound recordist but unfortunately he was unable to come to Kortrijk due to family issues. 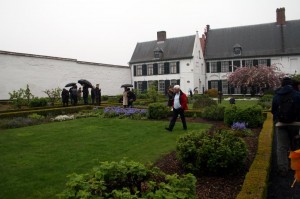 This garden of the Nunnery behind the hospital on Buda Island was the location of Christoph De Boeck & Patricia Portela’s work of text and sound responding to sap flow and plant information. 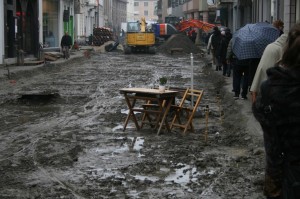 This was a funny sight on the way up Budastraat which as you can see is being re-surfaced. An enterprising cafe hadn’t let the mud dampen it’s spirits and Duncan and I joked that it is like a ‘Cafe in the Somme’ and fantasised about a soundtrack of mortar shells to go with dainty dunking of speculoos biscuits. 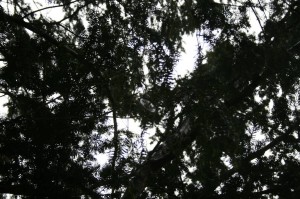 Dawn Scarfe had made a nice piece called ‘tree music’, manipulated sound taken from the site and played through small, light speakers that hung discreetly in the yew tree copse. 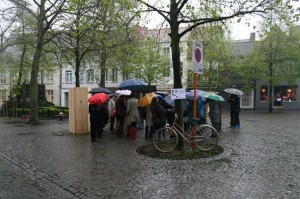 By now the party was thoroughly wet as this was almost the last station. It is to attest to Joost’s powers of description and curation as well as the dedication of his core audience that so many people were still with the tour by this stage. The group had by now taken on that quality of cameraderie as we were all feeling the drips down the backs of our necks and the cold creeping into our bones.

The Latvian artist Evelina Deicmane had recorded her father chopping wood in the forest and installed these wooden structures around the trees in the square which played the sound. 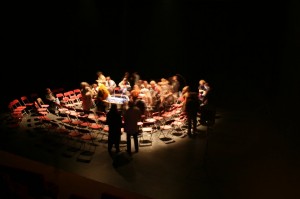 After the concert at Budascoop

The reward for our efforts was a warming chicken curry and seafood salad, bread and good Belgian beer (the local and dangerous Omer which is 8.5 percent alcohol), after which we listened to Jana Winderen and Chris Watson’s pieces of collaged field recordings.
This entry was posted in Diary, Walking and tagged joost fonteyne, klinkende stadt, kortrijk, sound art. Bookmark the permalink.