I was having a think in the bath just now after a long hard but enjoyable day installing our part of the group show that opens tomorrow (see our news page for more) about how artists get paid. I’m thinking about it because of a conversation today with Elly (Clarke) about a value for our work. Soph and I spent the last two days drawing every journey we have made in Berlin onto the gallery wall. Our naive thought was that this was unsellable until the brilliantly pragmatic Elly pointed out that we could price what it would cost to draw our traces on someone else’s wall.

This reminded me of an annoying incident at a Swiss artist‘s dinner party with the director of a public gallery in Berlin. It was annoying because I’ve now worked out what I should have said, if only I had had the balls. He calmly sat there eating, telling us how he never pays an artist a fee for exhibiting in his museum. I can’t understand how this can be – that the entire staff, from his lofty position to the lavatory cleaners get a wage, but the people that have produced the reason for the museum being there don’t get a penny (or cent). I wanted to ask him if he works for nothing too but was too gobsmacked, tongue-tied (it was happening in German) and cowardly.

This lead me on to thinking about my Dad, who I took away recently, who has been painting since leaving National Service in 1959 and who lives in a council flat in South East London. My Mum has recently bought an old work of his she was directed to online and heard of another from this auction house. The description of Lot 573 is: Albert Belasco (20th century), Untitled, oil on board, signed and dated ’72, 35.5cm x 40cm. I nicked the following picture from their site (naughty me – but I’m feeling pissed off so I think they deserve it). 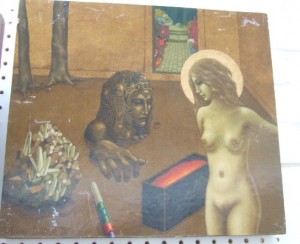 Firstly, my Dad has lived into the 21st Century. Secondly, although I can’t look up the catalogues here, this painting has a title – my Dad thinks it was called ‘The Magician’s Garden’. [UPDATE 30 June: Mum bought this painting and found the catalogue – it’s called ‘Pandora’s Wish’] Thinking about the unknown story of that painting and how it came to be languishing in an auction house in Sussex, I thought my Dad isn’t making a penny out of this, only the people that are passing it round with bad information. Shouldn’t artists get a commission when their work changes hands? Just an idea.

This entry was posted in Diary and tagged art, artists, fine art, money. Bookmark the permalink.